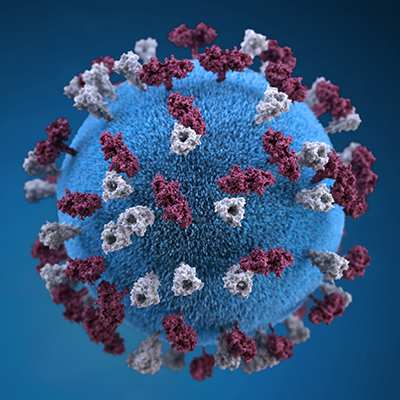 In this study, conducted at Scripps Research, 100% of animals treated with VIRALEZE™ before and after Omicron virus challenge had no detectable virus in lung, trachea or nasal cavity up to four days after exposure. Viral load in the lungs and trachea of these VIRALEZE™-treated animals was reduced by >99.999% compared with the virus levels in saline-treated animals when assessed seven days after viral challenge with SARS-CoV-2 Omicron. Notably, animals treated with VIRALEZE™ before and after infection had no detectable Omicron virus in the blood at any stage of the study.

These impressive results for VIRALEZE™ were in contrast to control saline-treated animals, where 100% had high levels of virus detected in blood, lung, trachea and nasal cavity from as early as two days post-challenge.

Animals treated with VIRALEZE™ only after intranasal viral SARS-CoV-2 Omicron challenge also exhibited >99.999% reduction of virus in the lungs and trachea seven days after infection compared with saline-treated animals. This finding is important because it suggests that even when VIRALEZE™ is used after exposure to virus (e.g., you forget to use the spray before exposure to a high-risk situation), it has potential to provide significant benefit. All VIRALEZE™-treated animals also exhibited a significant reduction in proinflammatory cytokines compared with saline-treated animals, indicating reduced severity of disease.

These new findings for VIRALEZE™ indicate that it is highly effective in inactivating and blocking Omicron virus in vivo, resulting in reduced viral load exposure, and thereby preventing or significantly reducing infection. Furthermore, despite significant mutation of the SARS-CoV-2 virus, VIRALEZE™ provided high levels of protection against the highly infectious Omicron variant. The results of this in vivo study are consistent with previous in vitro findings where VIRALEZE™ has demonstrated high levels of activity against all SARS-CoV-2 variants tested to date, including the highly infectious Omicron, Delta, Alpha, Beta, and Gamma variants.

“Countries around the world are experiencing significant strain in their healthcare systems as a result of Omicron outbreaks. VIRALEZE™ represents an additional tool for use alongside vaccinations in these challenging times.

“These latest findings show VIRALEZE™ to be highly effective against SARS-CoV-2 Omicron infection in a well-established and stringent, WHO-recognised challenge model. These results build on previously reported and published data, demonstrating that our antiviral agent SPL7013, in VIRALEZE™, retains impressive antiviral effect, even against the most infectious variants of SARS-CoV-2. Further, they show that even when used only after exposure to virus VIRALEZE™ has the potential to provide significant benefit.”

“This latest virus challenge study provides further evidence that VIRALEZE™ nasal spray can protect against SARS-CoV-2 Omicron infection in the nose, lungs, and trachea in a well‑established model of coronavirus infection. When administered nasally, VIRALEZE™ significantly reduced the amount of virus in the respiratory tract and in blood, and the production of pro-inflammatory cytokines.

“Given the extraordinary infectivity of the SARS-CoV-2 Omicron variant, which is approximately 4 times as infectious as the highly infectious Delta variant, it is particularly impressive to see VIRALEZE™ retain such highly protective effects against infection when administered either before and after, or only after challenge. These findings highlight the potential for complementary measures such as VIRALEZE™ nasal spray to help fight the ongoing pandemic, given the ability of Omicron to evade immunity from vaccines.”

VIRALEZE™ is a broad-spectrum antiviral nasal spray that has been developed by Starpharma to be applied in the nasal cavity to help reduce exposure to virus. These new data provide further in vivo validation that VIRALEZE™ can block and inactivate virus in the nasal cavity, and suggest that VIRALEZE™ could be used to help to protect from infection with respiratory viruses, including SARS-CoV-2, and potentially as post-exposure prophylaxis to reduce severity of viral respiratory disease.

VIRALEZE™ also has a potential role in future pandemic preparedness given that SPL7013 in VIRALEZE™ has been shown to highly effectively block a broad spectrum of respiratory viruses, including pandemic-causing viruses, such as multiple variants of SARS-CoV-2, SARS-CoV, MERS-CoV, influenza A and B viruses, and respiratory syncytial virus (RSV) in vitro.

Data from around the world indicate that vaccines against COVID-19 are highly effective in preventing severe disease and death. However, with the Omicron variant, many vaccinated individuals still become infected, giving the opportunity for additional variants to develop, and some people will require hospitalisation. Complementary interventions, like VIRALEZE™, that can reduce viral load at the primary site of initial infection remain important to help reduce transmission of virus from infected individuals. This is particularly relevant in the current environment where the dominant variants of SARS-CoV-2, such as Omicron, have higher transmission rates and have demonstrated evidence of vaccine escape.

In this study, conducted at Scripps Research, a K18-hACE2 mouse model[2] was used to evaluate the anti-SARS-CoV-2-Omicron efficacy of VIRALEZE™ nasal spray. This model is an established challenge model, recognised by the World Health Organization (WHO) and other researchers, for investigation of coronavirus SARS-CoV-2 infection, where the animals express the human ACE2 receptor that is responsible for mediating virus and cell receptor interactions (i.e., allowing virus to enter the cell, which leads to infection).

In this experiment, three groups of animals (N=12 per group) were used. Two groups were administered VIRALEZE™ and the third group received phosphate-buffered saline (PBS) intranasally. On Day 0, one of the VIRALEZE™ groups and the PBS group received the allocated treatment intranasally 5 minutes prior to and 5 minutes after intranasal virus challenge with the SARS-CoV-2 Omicron variant (hCoV-19/USA/MD-HP20874/2021); the second VIRALEZE™ group was treated only 5 minutes after intranasal virus challenge.[3] Animals in all groups then received the allocated treatment intranasally once daily for 6 additional days. Four animals of each group were euthanized on Day 2, Day 4 and Day 7 for assessment of viral load and cytokines.

Status of infection was determined by measuring viral load by reverse transcription quantitative real-time polymerase chain reaction (RT-qPCR) in blood samples (Day 2, 4 and Day 7); and RT-qPCR from samples of nasal cavity swabs, and lung and trachea tissue homogenates (Days 2, 4 and 7). The inflammatory status was assessed by an enzyme-linked immunosorbent assay (ELISA) cytokine panel performed on plasma (Day 2, 4 and 7).

Virus was detected in PBS-treated animals from Day 2 post-infection and the amount of virus escalated significantly over the Day 4 and Day 7 timepoints in blood, lung trachea and nasal cavity. Treatment of animals with VIRALEZE™ pre- and post-infection markedly reduced SARS-CoV-2 Omicron viral load in the lungs, trachea, and nasal cavity compared with PBS.

Data from the study, showing viral load in lung tissue, are provided in Figure 1, below. Full data are currently being prepared for scientific publication.

VIRALEZE™ is registered as a medical device in more than 30 countries and is available in certain markets online. Product claims may differ by market. Starpharma markets VIRALEZE™ via commercial arrangements in countries in Europe, Asia, and the Middle East. VIRALEZE™ is not approved for sale or supply in Australia.

This study was conducted in strict accordance with protocols approved by The Scripps Research Institute Ethics Committee, the Institutional Animal Care and Use Committee, and with the recommendations in the Guide for the Care and Use of Laboratory Animals of the National Institute of Health (NIH). Starpharma is committed to upholding clear and strong bioethics principles and conducts its business in accordance with the highest standards of bioethics, throughout all areas of its business. These principles guide Starpharma in the conduct of clinical trials and the welfare of patients, the treatment of animals and the use of medical knowledge.

[1] This widely used, WHO recommended model (K18-hACE2 mouse) utilises a specialized strain of mouse to mimic COVID transmission in humans. Each animal is administered a large dose of virus directly into the nose, so they represent a challenging assessment tool for preventative and therapeutic agents.

[3] In the current study, using the highly infectious Omicron variant, we used 1000 plaque forming units (PFU) virus particle equivalents, administered directly into the nose of mice.
For comparison, virus particles in the air in medical staff areas have been estimated to be approximately 40 viral RNA copies per cubic metre1. Considering less infectious early pandemic strains of SARS-CoV-2, a study suggested that the number of virus particles needed to infect an individual is the equivalent of approximately 10 to 100 PFU2.