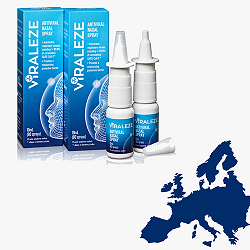 VIRALEZE™ is already available in the UK through LloydsPharmacy’s 1,400 stores and online and is expected to be available via independent UK pharmacies later this month.

VIRALEZE™ is a broad spectrum antiviral nasal spray that contains astodrimer sodium (SPL7013), which is virucidal, irreversibly inactivating >99.9% of coronavirus/SARS-CoV-2 within one minute[1]. These antiviral studies were conducted at the renowned Scripps Research Institute in the US and a number of other specialist virology laboratories.

The active in VIRALEZE™ (SPL7013) has demonstrated potent antiviral activity against multiple strains of SARS-CoV-2 as well as other respiratory viruses, including cold viruses, influenza, RSV (respiratory syncytial virus), MERS, and SARS.

VIRALEZE™ antiviral nasal spray forms a physical barrier to respiratory viruses in the nasal cavity and has multiple unique advantages, including its virucidal action, its rapid onset (inactivates >99.9% SARS-CoV-2 within one minute, in laboratory studies1) and its ability to inactivate virus either before or after exposure1.

Dr Jackie Fairley, CEO of Starpharma commented: “We are delighted to be rolling out VIRALEZE™ in Europe following the UK launch. The product has been very well received in the UK, and we hope that VIRALEZE™ will provide European consumers with added peace of mind.”

“In addition to making VIRALEZE™ available direct to consumers in Europe via www.viraleze.co, commercial discussions for distribution continue in parallel. Starpharma is actively engaged in discussions with a variety of organisations in the region, including sporting teams, which have expressed interest in VIRALEZE™.”

VIRALEZE™ is registered in the EU. Starpharma is pursuing avenues to provide rapid access to VIRALEZE™ in India, including opportunities for expedited registration and distribution in the region. The Company is also progressing regulatory activities for a number of markets, including Australia, with the intention to roll it out across multiple markets.

VIRALEZE™ Antiviral Nasal Spray was developed by Starpharma (ASX: SPL) and is registered for sale in Europe. It is an easy-to-use antiviral nasal spray containing 1% w/w astodrimer sodium (SPL7013), shown in laboratory studies to inactivate respiratory viruses, including >99.9% of coronavirus SARS-CoV-2.

VIRALEZE™ binds to and irreversibly inactivates a broad spectrum of respiratory viruses. Inactivated viruses are blocked from attaching to cells inside your nose and taking hold. In addition to providing a protective antiviral barrier, VIRALEZE™ provides a moisturising layer to help keep nasal tissue hydrated, protecting it from dryness and damage.

SPL7013 is included in products that are already approved in >45 countries and available for sale in the UK, Europe, Japan, South East Asia, South Africa, Australia, and New Zealand.

VIRALEZE™ can be used alongside vaccines, masks, and physical distancing.