Starpharma is developing an enhanced form of docetaxel known as DEP® docetaxel (dendrimer-docetaxel).

Docetaxel is a leading chemotherapy drug used to treat a wide range of solid tumours including breast, lung and prostate. It is marketed by Sanofi Aventis as Taxotere® and generated sales in excess of US$3 billion in 2010.

In pre-clinical studies DEP® docetaxel was shown to have substantially better efficacy and lower toxicity than Taxotere® alone. Of particular significance was the absence of neutropenia, the major dose-limiting toxicity for Taxotere®.

DEP® docetaxel is water-soluble and does not require surfactant such as polysorbate 80 for dissolution. Drug substance is readily manufactured at scale using standard chemistry under cGMP.

In xenograft studies DEP® docetaxel demonstrated a significant enhancement of anticancer effect when compared to docetaxel/Taxotere® alone. Furthermore, in the study 60% of animals treated with DEP® docetaxel had no evidence of tumours at 94 days - whereas 100% of the docetaxel treated mice showed significant tumour re-growth or recurrence at the same time point. 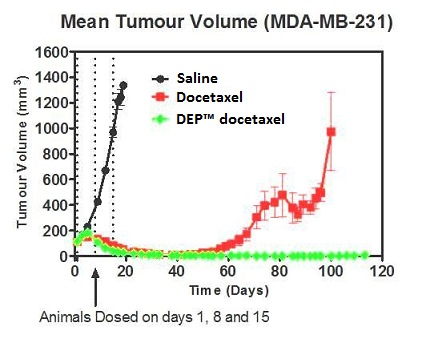 In hollow fibre studies DEP® docetaxel had significantly superior anti-cancer effects in vivo  across a range of important cancer types when compared to Taxotere®. Breast, prostate, lung and ovarian tumour types were tested.   In each case DEP® docetaxel was seen to significantly outperform the leading drug Taxotere®.

Neutropenia is the major dose-limiting toxicity for marketed formulations of docetaxel. Currently, rescue therapy for neutropenia can require expensive treatment with the growth factor G-CSF.  G-CSF therapy still leaves the possibility of severe illness, hospitalisation or death from infection. In animal studies it has been found that DEP® docetaxel eliminates the neutropenia or thrombocytopenia caused by Taxotere® alone.

Currently pre-treatment with corticosteroids is required before using Taxotere® or any marketed docetaxel formulation due to the inclusion of the surfactant polysorbate 80, which can lead to anaphylactic shock. Even with prophylaxis potentially fatal anaphylaxis can still occur.

The absence of surfactant in the DEP® docetaxel formulation may avoid the need for such prophylaxis, and avoid the risk of polysorbate 80 related anaphylactic fatalities.

DEP® docetaxel has been shown to preferentially accumulate in tumour tissues, with drug levels 40 times greater than are seen with conventional formulations of docetaxel. This is evidence of the significant tumour-targeting effect of Starpharma’s dendrimer formulation.

In pre-clinical models DEP® docetaxel has a plasma half-life of between 40 to 60 hours, more than 40 times longer than for docetaxel alone. It is believed this is a contributing factor to the improved efficacy of DEP® docetaxel.

Starpharma applies its DEP® dendrimer drug delivery platform to its own pipeline, and in collaboration with a number of well known pharmaceutical companies.

Applying DEP® in this way has the potential to create innovative products with increased patient compliance and effectiveness and also provide companies with a unique market position leading to enhanced commercial returns.

More information on the DEP® platform is available here.